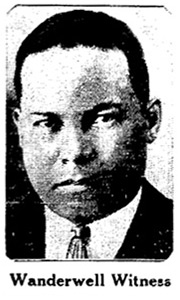 Where Curly Guy’s history is positively murky, Eddie DeLarm’s life and times is easier to trace. However, it too has a tarnished sparkle to it.

Eddie was born in Indian Territory in the state of Oklahoma, the son of a French-Canadian mother and an Arapahoe father. His Native name was ‘Longfeather’. He was the first Indian in America to receive a pilot’s license – a license that was signed by aviation pioneer Orville Wright. Out of respect, Eddie adopted Mr. Wright’s given name as his own middle name. During the 1920s and 30s, a time when most people could afford neither cars nor homes, Eddie had both, plus his own plane.

Connecting with Curly Guy in Glendale, California in 1931, the two became adept at skirting the law, especially the Volstead Act which was used to enforce prohibition. As a team, they smuggled everything from liquor, to drugs, to jewelry, to illegal Chinese immigrants. They flew from Southern California to Mexico and back, hauling contraband in both directions. They even moved gold bullion around under contract to media magnate William Randolph Hearst.

It was during this time that Guy became reacquainted with Aloha and Walter who had arrived in Long Beach to buy a schooner and continue the expedition, this time by water to the South Seas.

Although DeLarm and Guy appeared to be the best of buddies, their relationship was about as friendly as oil and water. However, both were well aware of the importance of the other to their individual and combined pursuits. In one particular incident, Guy especially would come to value DeLarm’s talents, both as a pilot and as a bender of truth. It was a matter of life and death after all.