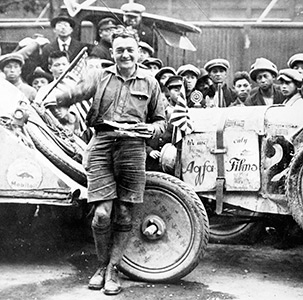 From a large family of mostly boys, Walter ran away from his home in Poland and went to sea at the age of sixteen. After several years crewing different ships all over the world, he disembarked for the final time in Baltimore, Maryland. It was from here that he continued his travels, this time mostly on foot. It is said that he hiked (walked) around North America for the better part of two years.

In 1917, just before America entered The Great War, Walter was arrested in the Deep South on suspicion that he was a spy for Germany. Taking pictures of seaports, Army encampments, and various military installations, not to mention carrying a portable radio telegraph machine, didn’t help his defence. He spent the remainder of the war incarcerated.

However, his time in jail was productive. Upon his release, he took possession of an immense automobile and began the lifestyle that would carry him and many others, including Aloha, around the world.

By 1922, the man who had placed the newspaper ad Aloha had so excitedly responded to had become the dashing traveller, filmmaker, lecturer, and inventor named Captain Walter Wanderwell. Together, Aloha and Walter quickly became front page news on all continents.

However, Walter carried many secrets with him. Among them… he was a married man!