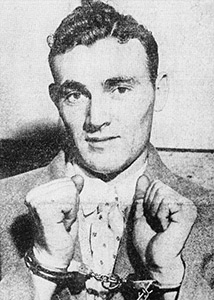 Guy is a mystery. His background – his entire life – is wrapped in questionable history. Even so, his presence in this amazing story of Aloha Wanderwell reveals a man who was opportunistic, pugilistic, enigmatic, and a would-be soldier of fortune. Were it not for several threads of evidence pointing to his ’well-placed’ personal and business connections, it would be too easy to add ‘gangster’ to the list of descriptors.

Curly, as he liked to be called, was born in Cardiff, Wales sometime in 1909. As a young adult, he travelled extensively, mostly by ship, working his way from port to port as a deckhand. Some experience in sleight-of-hand business practices, including smuggling, allowed him to flourish in most of the locales in which he found himself. He supplemented his mostly meagre finances as a boxing shill. As a pool shark might draw bettors into a round of high stakes billiards for some quick cash, he would pick a fight with the largest sailor in a bar, await the fistfuls of cash tendered by this fellow sailor’s buddies on a ’sure thing’, and then, unceremoniously, Guy would punch his lights out. Mostly, but not always.

Guy enters our story in 1930, with a woman he refers to as his wife, on the deck of a ship bound for the wilds of Brazil. Here he joins the Wanderwell Expedition, but the relationship between Guy and Aloha and Walter is tested on rocky shores several times, and they part company.

A short time later, back in California, he joins forces with Eddie, an airplane pilot with similar experience in shady business practices. It is here that the wheels begin to come off.