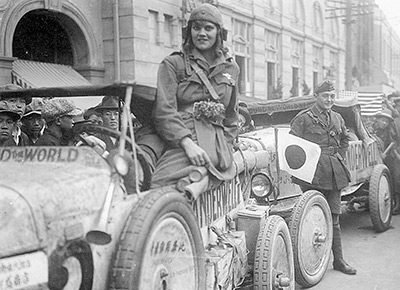 While Walter Wanderwell waited out the end of World War I and his release from a Georgia prison, he wasn’t idle. Mixing with the inmates of this particular jail eventually bore fruit that wouldn’t be realized until he was paroled.

The military prison was also the home to German POWs from the war. An example of Walter’s talent for coercion, if not PR spin, he arranged for his fellow inmates to build him a car. The result was a large heavy convertible capable of travelling great distances.

When the war ended, Walter and his new wife Nell, jumped into the machine and began zig-zagging across North America. Soon, however, Nell cooled on Walter – he had a roving eye for young girls – and Walter cooled on his new vehicle – the car was too big and too heavy to be loaded onto a ship for international travel. He was tired of North America and wanted to see the world by automobile. As Nell would say later, he was also tired of being run out of town by local constabulary for any number of perceived or real infractions – enforcement of the Mann Act would dog him for years.

Walter and Nell separated and went their separate ways – she with the original vehicle, Walter with a converted Ford Model T. 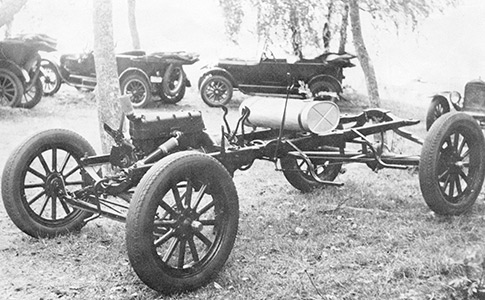 As a factory-fresh car, the Model T was quite light, but Walter took matters (and design) into his own hands. He stripped the car of anything that he felt was superfluous. Off came the metal roof, replaced by a canvas tarp. Away with the doors, replaced with… nothing. He even removed the floor boards and installed plywood flooring that could be removed to gain access to the power train in an emergency. Cars of any kind were still a new device to many, and so-called ‘roads’ in most places in the world were still in use by horses and buggies. Finding a mechanic would be next to impossible. Aloha later wrote that removable floor boards served another, more prosaic purpose: they could ‘relieve’ themselves without stopping!

In future iterations of Wanderwell Expedition vehicles, Walter would design and receive an industrial patent for a ‘fastback’ – a rear compartment that added to the aerodynamics of the vehicle, while functioning as a ‘black-out trunk’ where they could store their movie cameras, change film reels, and even develop the film in the field.

At one point in France, in need of a new vehicle for the expedition, Walter purchased the bare frame of a former ambulance. He hand-fashioned all the sheet aluminum and literally built the new addition from the ground up.

Ford had been building cars for years, but they also produced farm machinery which was distributed all over the world. If one of the Wanderwell Expedition vehicles lost an axel, a transmission, or blew an entire engine, a replacement could likely be found on a Czech farm or a Ukrainian commune – the parts were, mostly, interchangeable.

At the expedition’s height of popularity – 1932 – there were more than fifty of the specially-outfitted Ford Model Ts driving in all corners of the world. Today, none exist, although some family members continue to look.